We all know the saying “have your people call my people”, but if you feel the saying is dated you might be ready for its successor – “have your computer talk to my computer”. Machines are slowly but surely starting to communicate with each other. It’s been going on for ages at the industrial level, with all sorts of machines and computers exchanging information and instructions and now the trend has entered the home, where your thermostat talks not only to your furnace, but now also to your skylight motor, your blinds, your garage door and other sensors and pieces of equipment. Now imagine if the newest breed of systems – blockchains – were all able to speak to each other? That’s what interoperability between chains is – the ability of blockchains to exchange information, convey data and transfer value. 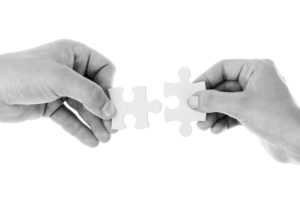 There are currently several hundred mainnet (primary) blockchains and several thousand blockchains that were created as copies of the mainnets and ‘forked’ into new chains. They can be categorized into three types of blockchains – public, private and consortium chains.

Most of them can’t communicate among each other.

Thousands of Blockchains Passing Notes, Or Interoperability Between Chains

So why does interoperability between chains really matter? Well, let’s look at what happens if you don’t have it. Thousands of monetary systems, logistics tracking systems and asset registraries are being built as we speak and unless we they have the ability to send information to one another they will be siloed, unable to communicate and exchange information and value with other systems.

No one is able to build the future by themselves, so they will fail.

So what are some of the real-world applications made possible by interoperability between chains:

How Does Interoperability Between Chains Work

There are several technical ways to make interoperability between chains work, including notaries, relays, and hash-locking. The most popular and easiest way for interoperability to work is through the mechanism of notaries, or using a third-party layer between separate blockchain networks that usually allows for the conversion of native tokens to a third-party token that keeps track of the transaction and acts as a securing agents. That intermediate token is then transferred to the target token.

Numerous projects are launching that aim to connect digital assets around the globe and as a result prove access to assets on all types of blockchains everywhere. This works just like today’s banks, which can provide almost all of the world’s currencies.

Some of the leaders in the interoperability between chains space includes Polkadot, Cosmos, Waltonchain, INT and IoTeX. However, all of them have the same goal. They are all are working hard to find real world solutions for connecting the diverse and divergent chains to allow users to more easily transact on blockchains and move seamlessly among them. This will allow users to take advantage of the functionalities of many chains, including governance models, payments, smart contracts and data storage. Interoperability will form the core of the future economy.

If you are looking to integrate your blockchain solution with other chains or if you’re interested in building a new blockchain that will work with others please feel free to contact MLG Blockchain to learn more.