A blockchain is a digital ledger in which transactions are recorded chronologically and publicly. These transactions are most often expressed through the transfer of an incentive token, referred to most commonly as cryptocurrency. This type of electronic ledger has several properties that make it different from the dusty ledgers of yesteryear.

Blockchains are not databases. They are just the logs – the metadata entries – of what goes into the databases. This is important because as you’ll learn later on blockchains have some limitations, including the speed at which they are able to process data. If all of the data in a database was included in a blockchain, the time to access and update that information would be very long. This is related to the fact that anything is added to a blockchain entry it has to be added onto all of the nodes. 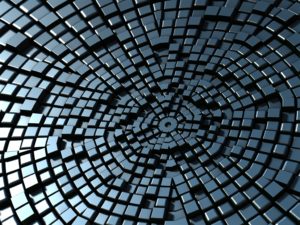 So what are blockchains good for if we already know that speed is one of its limitations?

They are great for cataloging and displaying data when data integrity is paramount. For example, when you go into a hospital a lot of data is created about you. This includes what medical tests you were administered, what doctor saw you, what the results of those tests were, your weight, any medication you were prescribed, what the results of those tests were and so on. When you leave the hospital that data stays with the hospital. You may of course ask for a written record of that data and you may even receive access to a digital version of your data, but technically speaking the hospital can lose your data, lock you out of your data, change that information without you noticing and impact the integrity of that data in other ways.

If your medical data was on a blockchain any changes made to it for any reason at any time would be noted. It would be impossible to omit anything or replace an entry, like for a blood test, with any other information. And because the dataset lives on many nodes it is almost 100% safe. You would also have access to your data from anywhere in the world, so if you end up on holiday in Jamaica your full medical history is just a node away.

Entries in these blockchain ledgers are kept orderly and up-to-date thanks to incentive structures developed for users of the blockchain ecosystem.

But blockchains have some additional limitations, not only low speed. Blockchain-ledgers are not the easiest to build and access to talent in this space is very limited. Ledgers are often conflated with cryptocurrency in general and as a result are subject to the whims of the market. The tech is still very new, quite complicated and risky for most consumers and enterprises to use (let alone buy into). Software and IT infrastructure is still has not been fully built and remains untested. According to many, mass adoption is still years away.

The most famous blockchain right now is the one that underpins Bitcoin, recording all of the financial transaction made with Bitcoin. You can view that ledger by going to a blockchain scanner. Steemit is another, a blockchain that powers a questions and answer platform similar to Quora and Yahoo Answers, but uses cryptocurrency to incentivize people to provide well thought out answers. Ethereum is one, with the lofty goal of being the world’s distributed computer. There are hundreds of others already live and working and thousands more currently in development.

If you believe that a blockchain-based ledger might make sense for your project or organization feel free to contact us.